Ten years ago I started this blog. One of my earliest posts was about the critical importance of treating people like adults and training for the attitudes and behaviors we want, not just those we don’t want. Is it still true today? You decide.Â 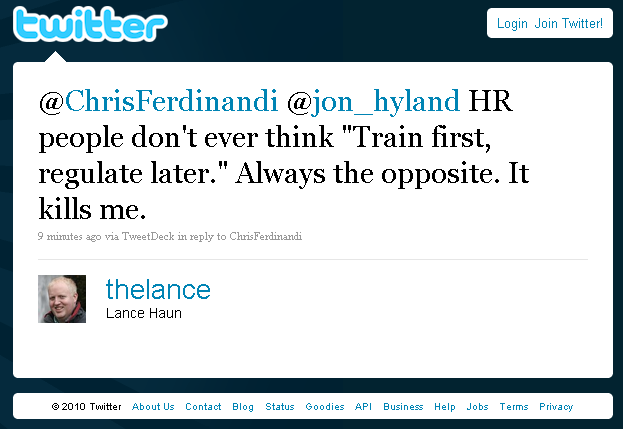 Hey! So, I’m not sure if you know much about me, but I’m a different kind of HR guy. I like being open and honest and treating people like… Well,Â people. Our employees aren’t children (and if they are, that’s a whole other issue!), so why do we treat them that way?

This ain’t my first rodeo

I’ve talked about this before. I attended aÂ supervisor trainingÂ where we spent two whole days listening to people whose favorite phrases wereÂ don’t do thisÂ andÂ don’t do that. I can understand setting those minimum standards, but I don’t understand why there’s no attempt to reach higher. Why aren’t we giving our people lessons on coaching and leadership in addition to the rest of that stuff?

Think about it, if you train people on the bare minimum qualifications and never go farther, where do you think most of them will rank? I’m willing to bet it’s somewhere right above the minimum!

No wonder we’re so busy

So, what can we do? Are we going to seriously think through each and every possibility and specifically say, “You can’t do that” and somehow keep a straight face? I have news for you. People are messy. They (we!) screw up. It happens. And there is absolutely no way in the world for you or me to guess what our employees are going to do next. It might bring tears of joy. It might bring cries of disappointment. But trying to sit around and think of things to tell people they can’t do is useless and pointless.

Remember back in elementary school when someone misbehaved and the whole class was punished as a result? That may have been effective back then, but it doesn’t work as well on adults.Â If someone screws up, don’t make a new rule against it if you already have something on the books.Â Enforce the rules you have.

If Bob is making a lot of personal phone calls and missing out on his work, talk with him about it instead of doing the classic indirect email/announcement saying, “Just wanted to remind everyone of the phone policy. It still exists. If you may have been abusing this tool, it kinda needs to stop. Thanks!”

Social media is a great example. Somebody somewhere (some of my friends included!) says, “Let’s block everything and maybe our slackers will get to work!”

One potential alternative: we could teach and train our people about the positives and negatives of the tools and then let them loose. If someone gets out of line, take care of that individual. Blocking those kinds of tools isn’t an effective long-term solution.

Three things you can do to change your thinking

And as this letter comes to a close, I ask that you think about your own workplace. If you’re committing these kinds of acts, stop. The world has enough of this kind of people.Â Let’s set the bar higher.