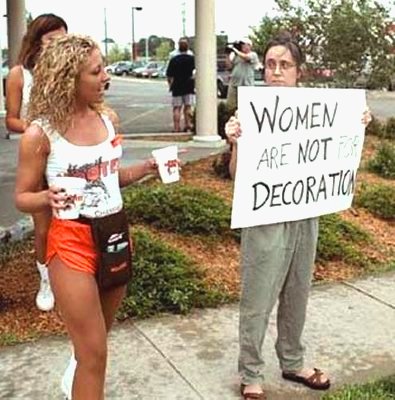 There’s been a recent popular news story about a Hooters employee who was basically put on a performance improvement plan for… being fat.

Although I’m not really a fan of the restaurant (their food doesn’t impress me and having women in tight clothing around doesn’t make it taste any better), I found this story interesting for several reasons.

A quote from a company spokesman in the video tries to clarify that the image/weight control issues are a job requirement just like they would be for someone in the Rockettes or the Dallas Cowboys cheerleaders.

This isn’t the first time Hooters has come under fire for pushing the boundaries of a labor law. Back in the 90s they were sued by some guys who thought that it was unfair that the server positions were women only. Since I don’t eat there, I don’t have much of an opinion, but I can say that it would have been rough seeing a guy in the tight shorts and tank top.

Check out the video of the news story below (original link). I find it ironic that the regional manager in the video obviously has a weight problem (although his position doesn’t require him to rely on his looks).

3 thoughts on “Hooters-Too Fat for the Job?”