This is a report detailing my some of my experiences visiting Guatemala as part of a mission team from 12/28/13 to 1/4/14. This has nothing to do with HR, management, etc. But hopefully you’ll enjoy it anyway. If not, you know where the “delete” button is. :-)

I’ll start off by saying that it’s very difficult to put into words what this experience was like and how much it meant to me. It will be a long time before I realize all the impacts of my trip to Guatemala. For now I’ve just laid out a timeline of events, because that’s much easier to write at this point in time.

Back in November I was attending my small group at church and a friend mentioned that the mission team to Guatemala was short by a few people. I looked at my wife and we quickly decided that I would go. I have wanted to for a few years, but one excuse or another would pop up and keep me from committing. On the flip side, I have worked with our team at church to put on the annual holiday auction for the past few years. That annual event funds the feeding center and some of the other ministries within Guatemala, so I definitely had a significant interest in checking out what all the efforts had led to over the years. 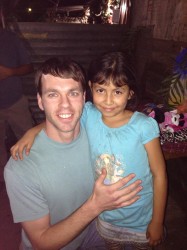 Hanging out with my new friend Elsa

I spent the next few weeks puzzling through my brain. Why was I going? What did I have to offer? To be completely honest, the thought of building a home was daunting. My skills are limited to “lift that” and “move this.” I’m not savvy with my hands when it comes to projects like that. I knew I wanted to spend time with the kids and just play and love on them, but what else could I offer? Why was I supposed to be there?

By the time I left, I still didn’t have an answer that satisfied me…

Fast forward to the end of December, and I was stepping onto a plane to head into Guatemala. I had spoken with a few previous visitors to get an idea of what to expect, but it was still a wide open canvas just waiting to be painted.

The plane ride was a quick hop from Huntsville to Atlanta, then a three hour flight from Atlanta to Guatemala.

We arrived on a Saturday afternoon and spent the evening resting and unpacking at the mission house located in San Pedro las Huertas.

On Sunday we got up, got ready, and went to a church service. The entire service was in Spanish, but they were very excited to have us there visiting, so they asked a few people to come up and speak to the group. Our music director also got up and sang two songs, which they enjoyed immensely. I speak some Spanish, but I couldn’t keep up with everything being said. However, when the pastor bent his head to pray, I heard, “Gracias” at least a dozen times in his prayer.

That made me stop and think. These people have so little, and yet they are incredibly thankful for the things they do have. It’s a powerful reminder that with all the things we have and take for granted on a daily basis…

I heard a great quote recently that this reminded me of: What if you woke up tomorrow with only the things you were thankful for today?Â Take a moment to think on that. It’s pretty powerful. I do know that I’m going to be more thankful for everything, even something as simple as being able to drink water from a faucet without risking an illness! 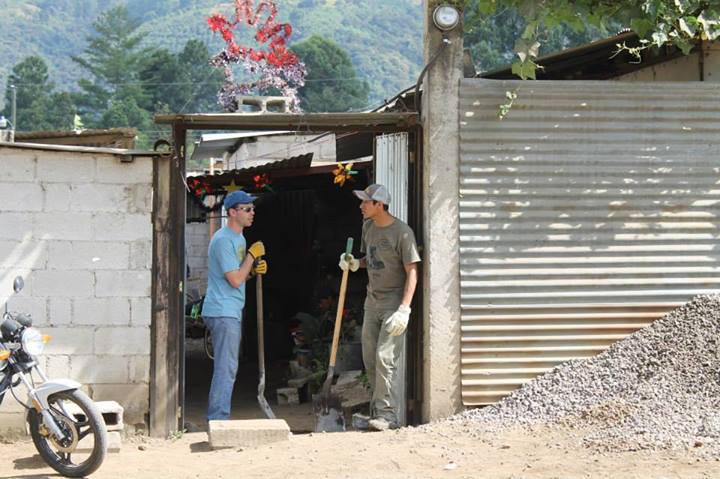 “Working” with my new amigo, Jonathan

After church we ate and went to the building site to prepare the area for the home we planned to build throughout the week. We dug holes, set posts, and filled them with concrete to dry overnight. As it got dark, the family we were building the house for brought us food and drinks as a “thank you” for our efforts. It was amazing to me that this family was so giving (food for 7-8 guys is a lot), even when they had so little to give.

That night, I walked with a few of the team down to visit Elsa, the sponsored child of one of my good friends from home. Elsa’s eyes were enormous as she opened the small box and marveled at the toys, lip gloss, and other trinkets inside. It was an honor to be able to make that visit on behalf of my friends, and I know she and her family appreciated the gift very much.

Monday we started early on the house. We started putting up the walls and roof. When you think “house,” this probably isn’t what comes to mind. This was basically a tin shed with a wood frame. However, by local standards, it was a fairly nice house. After we ate lunch and worked on the roof, I took a few minutes to wander out to the nearby area where the children were playing.

I absolutely love children, and I wanted to spend some time playing with them while I was there. I started swinging them around and letting them jump from the back of the truck into my arms, and it was my favorite few minutes of the entire day. Within minutes, the kids were saying, “Mono! Mono! Mono!” I couldn’t help but laugh, because that’s Spanish for “monkey.” Soon it was time to head back to the mission house, so I had to tell the children that I would be back the next day.

Tuesday-fun with concrete and monkeys 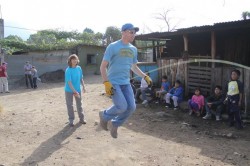 Showing the kids how to jump rope like a pro

On Tuesday we had to mix concrete to pour floors for the home. That involved shoveling sand and gravel and then mixing that with cement and water. All in all, it was a tough job, but certainly something that someone with my level of hands-on skills (i.e. zero!) could do without much fuss. After we got the floors poured, some of the guys began building the doors that we would put on after the floors set, so I wandered outside again to see the kids.

As soon as my head popped outside, they started shouting, “Mono!” and ran to me. I was swinging them and laughing, and then one little girl started saying, “Mono loco!” If you know how I act around kids, that’s a pretty fair translation: crazy monkey.

Again, I spent as much time out there playing with kids, learning names, and taking pictures before we headed back for the night. 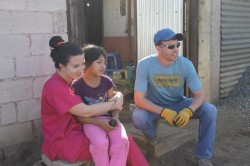 On Wednesday, we couldn’t return to the house as the floors were setting, so we went to the feeding center. Over the past few years mission teams have built a feeding center on the side of a mountain at San Cristobal el Bajo. This feeding center provides one meal, a vitamin, and a bible verse each day to over fifty children. For many of those kids, that is the only meal they will receive all day. The feeding center kitchen had a dirt floor, and to improve the conditions and make it more sanitary, the team mixed and poured a concrete floor in the cooking area. My only regret was that the feeding center was closed for the new year/holiday, so we didn’t get to see the children who normally visited the facility.

Thursday-house dedication and lots of hugs 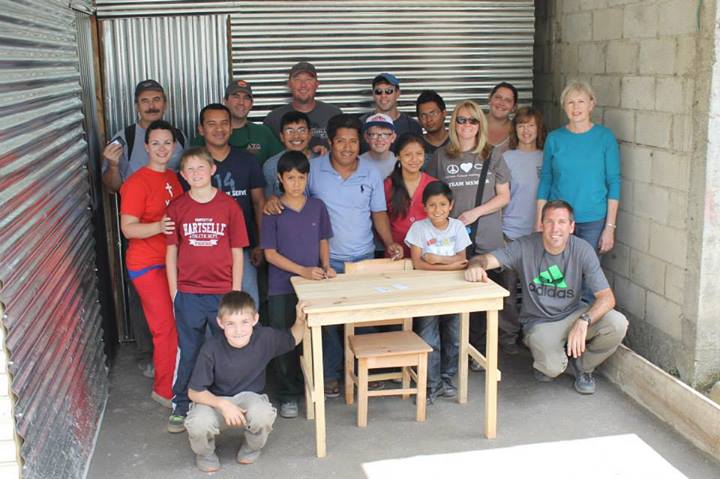 Dedicating the new home for the family

On Thursday we returned to the home to put on the doors and dedicate the home. After that special occasion was celebrated, we all had a chance to go out and help with Vacation Bible School for the children living in the squatter’s area. As we helped the children make their crafts, one of the boys brought his and gave it to me as a gift. It was incredibly thoughtful and I will treasure it!Â It was our last time to see the kids before we would leave on Saturday, so we gave extra hugs and said our tearful farewells.

That afternoon, we made several home visits to sponsored children. It was especially exciting for me, because I got to meet with Cesar, our sponsored child. He is currently in his “career” level classes in school, and despite the language barrier I was absolutely thrilled to get a photo taken with him. As I was leaving, his mother handed me a few old photos of Cesar. The translator asked if I needed to return them, but she just smiled and told me to keep the photos. That small token of appreciation was so special! 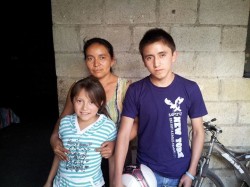 Cesar and his family

Later, we stopped by another home to visit other sponsored children. I was able to deliver yet another gift on behalf of our friends, and it was such a neat experience to see Francisco Javier get excited about the small toys and other goodies in his box.

Friday was our “off” day, after spending several days mixing concrete, pouring floors, doing construction, and going nonstop. We got to visit some interesting places around town, but for me the entire day was overshadowed by the upcoming departure. That night we hosted a youth group meeting for the local church and did some fun/funny skits and songs for them. 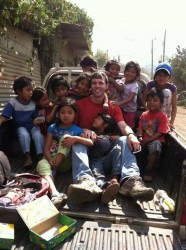 Spending time with the children at the squatter’s area

On Saturday morning we packed up and hit the road to head to the airport in Antigua. There were many hugs and kind words spoken, and I will not forget thinking about how we were heading back home and the others were heading back to the village to rest up for another day of ministering to the local children. Amazing.

This experience is difficult to describe in a few words, so I tried to give an account of the trip with some solid detail. However, I still can’t convey the lifechanging impact of the visit. I am anxious to return, and I hope to one day bring my family with me to visit the amazing people in Guatemala. Hope you enjoyed the story!

2 thoughts on “How I Fell in Love with Guatemala”