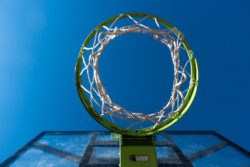 If you know me, you know I’m not a sports person. I don’t watch. I don’t follow.

It’s not that I have some strong dislike for sports. It’s just that when I stopped doing them in high school, I lost all interest. I can watch them, if I am at a live event or if I don’t have an alternative. But when I’m listing things I look forward to each week, that isn’t at the top of my list. If you’re like me, then this post is still going to be valuable for you!

That’s because despite my indifference to sports,Â at the same time it’s hard as a leader and as an HR pro not to think about some of the innate elements of building a high-performance team that stir my attention.

For several months out of the year, sports fans are focused on the NBA season and its teams and players. Yet one concept that isn’t often considered is the talent management strategy behind these teams. As theÂ New York PostÂ notes, dozens of team changes can happen on the first day of trading. How does the free agent model of employment affect teams and performance? What might enable or prevent new talent from connecting with team members?

The Core Element of Teambuilding

One of the core principles of building a team is this: a team’s existing dynamics change when you add someone new to the mix. In other words, you don’t just add one or more people to an existing team â€” you create an entirely new team any time you make a new hire. It’s like a recipe. While you might have separate elements, once you integrate them you create something new and different each time.

This concept is important to grasp, both for those leading a team and for those on it. It can be common for hiring managers to believe that adding a new hire to a team will change everything. However, it’s often a surprise to later find out that despite careful planning, things are just not the same after new talent is hired.

If you’re enjoying this post and want to learn more about how to match team fit and stability with a diverse set of individual strengths,Â click here to read the rest of my article on the ADP Spark blog.Â