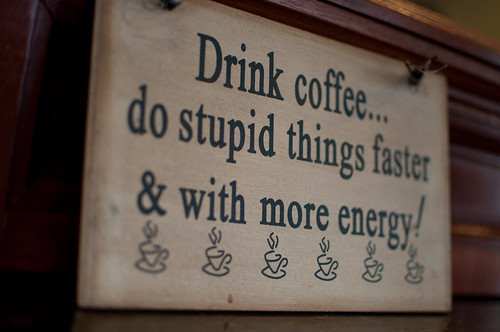 I\’ve mentioned it before, but I grew up working in a small business that my parents owned. When I heard about the HR Happy Hour last week, I figured I could get some juicy stories to share. Well, I was partially correct in that regard. See, the hiring manager takes everyone who passes the interview and makes them do a dry run of the job duties. That\’s also known as a realistic job preview. With a machine shop where they make precision parts around dangerous equipment, it\’s very important that the person be familiar with the basics of the job.

If the candidate does well enough, they can start the new gig as soon as they are able. If they don\’t make it that far, then they are never hired. With those reasonable hurdles to employment, it severely cuts down on the number of wild and crazy stories about employees. But it didn\’t diminish the number completely (amen to that!). Here are some of the employee horror stories highlights.

Snagger got his position through a program with a local community college so he could get some work experience during school. Snagger started to work, and things started turning up missing. One day, the supervisor glanced in Snagger\’s toolbox, and he saw that one of the stolen items was in the box. Snagger told him it was a gift from his dad. Later that day, the supervisor called the guy\’s dad to check, and the dad said it wasn\’t from him.

So the supervisor plans a sting operation. He\’s going to catch him red-handed. He called the liaison with the college, told him to keep it quiet, and warned him that he was going to catch the guy. The darn professor called Snagger into his office to talk about the theft, spoiling the sting operation and ruining any chance of recovering the stolen items. Then, to top it all off, Snagger\’s dad called to accuse the supervisor of spreading rumors about his son. Gotta love supportive parents.

Squeegee needed a break. He just needed a little chance, and he would be the best employee ever. Yeah, right. The guy started to work and started being late. Squeegee told his supervisor that he didn\’t have a car, so he was riding with a friend.

The supervisor, with his golden heart shining, offered to extend a loan to cover a cheap car for Squeegee to get to/from work easier. All Squeegee had to do was bring in the title and pay it off a little each week.

I bet you can see where this is going.

Squeegee kept â€œforgettingâ€ to bring the title, and he finally screamed, â€œIt\’s my carâ€ and left, taking the car (which was an atrocious choice, by the way) with him to wherever he ended up.

But the story doesn\’t end there. Squeegee\’s mom called the supervisor. He had been stealing from her at home, and she wanted the car situation to be rectified, so she told him where the car was hidden. The supervisor worked with the car lot manager to get the vehicle back, and the money was divvied up at the end of the transaction with each getting back whatever they could.

Shifty was a pretty good worker. He did his job well, and he even stayed late to pick up the slack whenever he could. He could have stayed there for a lot longer if a customer hadn\’t called the owner one day to let him know that Shifty was going through the Rolodex every night, calling the customers to try to underbid his own employer. Shifty? More like Scummy, if you ask me.

Okay, those are just a few of the employee horror stories I\’ve seen over the years. Do you have any you can share? Feel free to change the names or post anonymously!