Running is a passion of mine. So is HR. So why not marry my love for the two in written form?

I recently put together this collection of stories about running, business, and life. More than half of the content is brand new and not published anywhere else, and the book runs about 35 pages in length (which means virtually nothing in the world of Kindle/eBooks, as I’ve learned!)

A special thanks goes out to those that responded to my recent survey and allowed me to highlight them in the book. They all share their own inspirational stories about how running makes them better at this human resources thing.

Thanks again for your support and I look forward to checking out the reviews. You can get a copy of What Running Taught Me about HR: Essays about running, work and life right here.

I had a fun idea while running the other day to put together some thoughts about running and HR. I have posted here several times in the past about how it has helped me to draw parallels between training for a race and practicing HR on a daily basis, and I’d like to put something together that would be of interest to the HR crowd in general and the running/HR crowd in particular.

For those of you that look at us runners with a mixture of pity and disdain, no worries. We won’t make you run if you won’t make us stop. :-)

Have a great week, everyone! 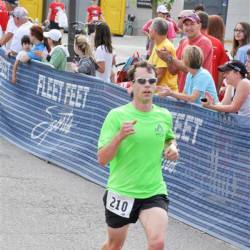 If you’ve followed for a while you know I enjoy running (I’m on MapMyRun, if you’d like to connect!) I’m also a bit of a nutrition nut due to a high school stint in wrestling, several years of running marathon distances and longer, and generally being a nerd. One thing that I have learned over time, and studies have backed up this observation, is that all of us consistently overestimate the calories we burn and underestimate our intake. Let’s repeat for clarity’s sake:

We consistently overestimate the calories we burn and underestimate what we consume.

It’s a part of being human to want to maximize our successes and minimize things that detract from our performance. As I thought through this idea (on a run, of course) I considered the parallel in the workplace when it comes to communication.

Put simply, managers think they are communicating plenty. They think they are rockstars at communication and have it completely taken care of. At the same time their employees feel clueless and out of the loop. They are not getting sufficient information to do their jobs well and wish the manager would share more often.

Same principle: we want to maximize the activities we do (Wow! I communicated that well. I rock!) and minimize things that detract from that (Well, if the employees listened more then they would know what’s going on.)

One thing I do now for sure–in all of the thousands of employees I have met over the years, I have yet to come into contact with one that told me, “My manager communicates too much.”

When in doubt, share information. The best leaders know that sharing information is more powerful than holding onto it in the long run, even when you have to communicate with difficult team members.

What are your thoughts on manager feedback and communication?

I was runner #5 in our van of 6 runners. The way the relay worked was one van is active on the course at a time, so runners 1-6 would run a leg, then that van would go “inactive” for 5-6 hours while van #2 and runners 7-12 ran their portions (approximately 33 miles were covered each time a van was active). Each runner ended up with three legs to run, averaging anywhere from 13 to 19 miles total per person. My own total was 18.3 miles, and even though I’ve run that far on plenty of previous occasions, it still hurts a good bit when you run each leg as hard as you can. END_OF_DOCUMENT_TOKEN_TO_BE_REPLACED 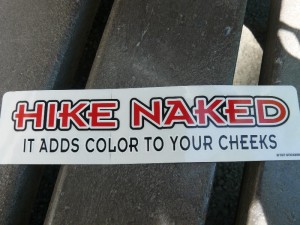 I’m taking a moment for a non-HR post today. Enjoy!

In about a week I’m going to be running a local 5k race, and I’m hoping to get out there and have a great time. Oh, and I’m going to leave my shoes in the car. Why? Because barefoot running is something that I truly enjoy. I’ve learned the hard lessons already, and now it’s just a chance to feel free and happy while I’m getting in some miles.

What are the hard lessons, you ask? Well… END_OF_DOCUMENT_TOKEN_TO_BE_REPLACED 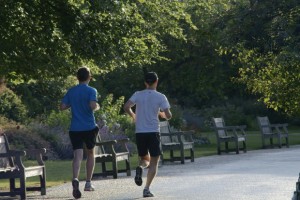 We’ve estimated that the group as a whole has covered over 2,000 miles just in the past 8 months! A sizable portion of that falls on us training for the upcoming marathon, but the rest is spread among half a dozen others who join us for a few miles whenever schedules allow. The average runner burns 100 calories per mile, so that pushes the group total calories burned to 200,000! In order for a person to drop a pound, they’d need to cut approximately 3,500 calories from their diet over time. Using those numbers, the group has burned enough calories to shed just over 57 pounds. END_OF_DOCUMENT_TOKEN_TO_BE_REPLACED 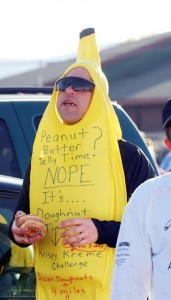 A few months back we started a running team at work. The Pinnacle Pounders go out every Tuesday afternoon and run together. There is a great sense of camaraderie, and it’s just a great way to de-stress after a long day. Again, the only people who show up are those who are already runners! We are working to get some of our staff out there to walk our little course, but so far we’ve been unsuccessful. I’m hoping the people who see us enjoying ourselves and having more energy during the day will consider joining us, but only time will tell.