We’ve probably all heard the axiom that 10,000 hours of practice is what it takes to be world-class at something (speaking, skiing, dancing, etc.) But what if that has been misquoted all these years?

A new book called Peak is out, and it’s a look at what it takes to get to a world-class performance level. The author was the originator of the study years ago that confirmed the 10,000 hour mark, but he is very careful to point out that it doesn’t simply mean doing the thing for that long. It requires uncomfortable, deliberate practice to get to the level of performance that leaves others in awe.

Maybe you have aspirations to be truly great at something. It doesn’t come without some level of discomfort. You have to practice instead of watching TV or doing other mindless activity. You need to push yourself beyond your comfort zone in order to grow and develop.

Think of it like weightlifting. If you keep doing the same weight at every session, you never improve your strength or endurance. You have to vary the weight, reps, and intensity to continuously push your threshold.

Some of the world’s best speakers use speaking coaches to help them hone their craft.

WithinÂ organizations, HR leaders areÂ acting as performance coaches for leaders to help them see blind spots, grow their capabilities, and have a greater impact on the organization.

On a professional level, how are you working to improve what you know and what you can do?

The premise of the title comes from the book Peak. The authors found that practice doesn’t make you better. In fact, practice could make you worse or at least keep you at the same level of performance indefinitely. Think about that for a second. It’s counterintuitive to everything that we’ve been told all our lives. You’ve been told to just keep practicing and you can be great. But that’s not necessarily the case. If you’ve been following a set path or pattern over the years, it might be time to shake some things up.

I see this in an employment context when I talk with someone during the interview process. The person claims, “I have ten years of experience in HR/finance/operations/whatever.” Then I ask them what they have done, and often it doesn’t sound like ten years of experience–it sounds like the candidate is repeating their first year over and over again.

Crazy thought: what if we were forced to be honest about how much experience we have with specific skills? Instead Â of being able to say you have five years of recruiting experience, we knock that down to just one year because you never did anything different or grew in any way during years two through five. I think that would be an incentive for people to not just take their roles for granted, but to truly attempt to innovate and grow in what they do every day.

So what would five or ten years of experience look like? I see it in a few ways. 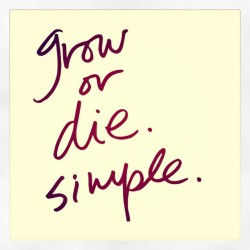 Remember, practice doesn’t make you better.Â It’s this concept of deliberate, uncomfortable practice that truly makes you better. Is it always fun to view webinars, read books, and seek out articles that support what you’re working on? Not really. But it is necessary.

In HR it seems like we forget about the idea that we’re competing with other businesses. If their HR practices are better than yours, they will have the advantage. While HR is often in charge of heading up training and development efforts, how often do we model the right behaviors by taking training (free or paid) ourselves?

What if I just want to be competent in a new skill?

Okay, so maybe I’ve sold you on the idea of pursuing your own development. But who has 10,000 hours to spend? And what if you don’tÂ need to be world-class, just competent, in a specific skill (like writing a report, calculating metrics, or delivering a speech)?

Another compelling idea I’ve discovered in the past few years is the concept that justÂ 20 hours of practice is enough to get you to a viable level of performance. In a book called The First 20 Hours, Josh Kaufman explores how we learn new skills and puts it to the test. This includes a live demonstration of a new skill he acquired during his TEDx video (I won’t spoil it for you. Email subscribers, click through to view the video below).

Some of us have ambitions to be great at one thing or another, whether it’s related to work (sourcing candidates, coaching managers, delivering presentations) or not (crocheting, playing a musical instrument, running). I think it’s bigger than that. I would argue that purposeful growth, even if on a personal level, makes you more valuable as an employee. Think about the people you know. Those that are always trying something new and exploring new concepts are more exciting than those who quit trying to learn anything new years ago and are stuck in their rut of sameness day after day. In addition, though it’s anecdotal, I have seen amazing connections come from participating in outside activities that actually improve my work.

In a non-work example, I have a friend I coached years ago in a couch to 5k training plan for a local race. Many of her peers in the group have quit running and walking and are back to their old ways. However, she is always telling me about these crazy mud runs and other obstacle course races she is doing. The fun part? She’s over fifty years old and still going strong.

That is incredibly motivating for me, and I think about that within a work context. The more I can grow and help others, the more the other employees will be inspired. And their development not only increases their engagement–it helps the business to grow and improve as well.

So take a few minutes today and think about what you might like to get better at. Maybe you want to study for your SPHRÂ or just brush up on your presenting skills. Maybe you want to grow and become a specialist in compensation or a top-tier recruiter. Whatever the case, start identifying some resources to move you in that direction.

What skill, work-related or not, have you always wanted to improve?Â