A few weeks back I attended the first day of the HR Technology Conference in Chicago. I had an expo only pass to go in and see the vendors, and I was reminded yet again of the awkwardness of the current setup. At one point my friend and I were walking down the aisle and someone asked us a question, my friend answered, and the person started trying to steer him over to their booth. It was very strange and uncomfortable, and I am not a fan of that approach.

I completely understand that it’s their job to hit up prospects and get people into the marketing funnel, but we both walked away with a bad taste in our mouths due to that person’s “hard sell” mentality.

If I have no experience with your company, there’s a low likelihood that I will just randomly decide to stop at your booth. That’s why many vendors bring swag, but then they get annoyed if you stop and take some just to walk away again. There needs to be a time of building a relationship before the sales pitch, and that’s where some of these suggestions come in.

During my time in the expo hall, I took a few minutes to meet with a handful of vendors for very different reasons. 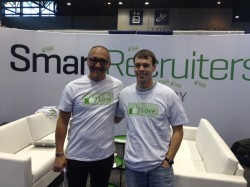 Hanging out with Jerome, CEO of SmartRecruiters

Looking back I might have peeked at another booth or two, but those were the main ones. And two of those vendors I stopped to see had come to and participated in one of the HRevolution events previously. Connect before you sell.

For those of you who spend thousands of dollars on a conference booth, I’ll never understand you. That is all.

I think a more valuable way to connect with prospective buyers would be to find out ahead of time what tools they use, and then ask them if they would be willing to spend a few minutes in the booth talking to other prospective customers. More of a user-to-user conversation with no sales pressure. There’s power in referrals. Let your customers help bring in the prospects, and you’ll have a higher conversion rate than the random person who walks up to your booth because it’s big and sparkly.

This idea isn’t perfect and could be tweaked, but it’s a starting place. Find out if any of your customers are attending these events and ask if they would be willing to talk with other potential users about their experience with the tools.

Or even on the customer side of things–reach out to your vendor to find out if they will be there, and then plan to stop by for a few minutes to offer a “live testimonial” about what you like.

Maybe I’m just crazy and the only one who dislikes the setup of these things. Anyone else think it’s time for a change?