When I tell people I work in Huntsville, I usually get a glassy-eyed stare in return. I mean, really, I work in Alabama. How great could that really be, right? Cotton fields… Relatively low population density… Who cares? :-) 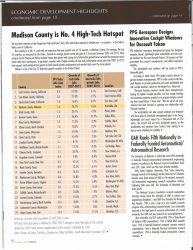 The other day I ran across this study and wanted to share. Just click on the image to view it larger. The gist of it is that the top three fastest growing technology jobs areas are all centered right in Silicon Valley. No big surprise, right? But number four on the list is my own hometown of Huntsville! Pretty cool to see.

With the concentration of NASA, Redstone Arsenal, and the various other government contracting firms in the area, we are not what people think about when they think of Alabama.

In a 2011 study, Huntsville came in as the “4th geekiest city in the US” based on the number of math/science-based jobs and the average educational level of the people in the city.

I’m using a familiar place to illustrate the example, but I get a few key lessons from this kind of thing.

Have you ever been surprised by a place you had to recruit for?