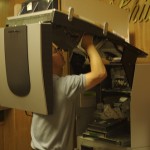 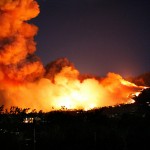 That\’s a snazzy title if I do say so myself! Where did it come from? Well, I was reminiscing about crazy work stories with my coworker, and I then remembered that I\’d never really told the story of how I set an ATM on fire while on the job. Soâ€¦ Here we go!

In the summer after I graduated high school, I wanted to get a job other than working for my parents as I had for several years. So I talked with a friend who was a branch manager at a local bank and she recommended me for the summer hire program. So for the first time in my life, I went to interview for a job.

Needless to say, I got the job. And strangely like my current profession, I was one of the only men to do the job of a bank teller. :-) Anyway, I had been working at different banks in the area, rotating to a new one every other week. Finally I ended up at a location that I really liked. The other tellers were friendly and really enjoyed having me around.

Every day around two o\’clock, two tellers had to go out and restock the ATM. I was always running the drive thru, so I didn\’t get to go out and see how the ATM worked. I was interested in learning, so I got one of them to let me swap and go out to observe.

The next day, I went out with the other teller. Don\’t forget, I was just out of high school, so I was pumped about learning about how something cool like the ATM worked. As she opened the door inside the ATM and started counting the money, I couldn\’t really see what she was doing. I walked around her to see the other side, but the door was in my way. So I pulled it open.

Apparently the door to the ATM was on some kind of half-hinge that disconnects when opened all the way. When I pulled it past a certain point, the solid steel door slipped off its hinges and fell to the floor, ripping out the cables that attached it to the ATM.

Smoke immediately started boiling out of the ATM and an incredibly loud alarm began blaring. Being lowly tellers, we had absolutely no idea how to fix the problem I had caused, so we both went back into the bank and called Diebold to come and fix their darn ATM.

I was the lucky sucker who got to go out and put the â€œOut of Orderâ€ sign on the ATM when the technician told us it would take a week to fix.

Anyone else have a horribly embarrassing or completely hilarious story to tell about one of their early jobs? I know I can\’t be the only one!