Note from Ben: my wonderful wife, Melanie, recently wrote this as a personal tribute and “thank you” to those veterans closest to our family. She’s taken to doing more writing of late to share personal stories with our kids both now and in the future, and I am always touched by the words she crafts to explain emotions, feelings, and more. Sharing here with her blessing.Â 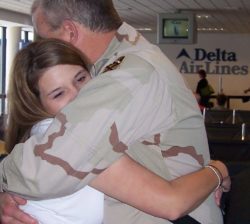 For 20 years, I selfishly thought as Veteran’s Day as just another day. Another day to miss school and/or work.

I remember the day I received the call. I was in Scottsboro cheering Ben on as his brothers and he competed in a triathlon. My phone rang and it was my mother telling me that my dad had received word that he would be sent to Iraq for a year, possibly longer. I broke down, went and hid in the restroom, and thought of nothing more than my father’s safety.

The time that led up to his deployment was hard. We tried to fit in a lot of family time, but we also kept dreading the day we would have to send him off.

Eventually, we all gathered at the airport, hugging him tightly. Then he boarded his plane and was gone.

We coped as best we could. We stopped watching the news, avoided newspapers, and continued to pray for his safety.

We received letters, emails, phone calls, and pictures. Technology has come so far. We didn’t have him home, but we heard from him often.

Thankfully he remained safe during the full term of his deployment, but things at home didn’t go as hoped. His mother was suffering from cancer, and we knew her days on earth were numbered. He received personal leave to come home, but when he arrived, she no longer was responding to us. She soon passed away.

Also during this time, my sister had to have an emergency c-section due to preeclampsia. My niece was born not breathing, but was revived. She was taken to a NICU at another hospital while my sister recovered in the ICU where she delivered. Things were very scary. We kept these details from him until we knew they were both going to be okay.

My point is that not only are our military men and women put in harm’s way, they miss so much family time when they are away. Instead of thinking of today as just another normal day, make it a point to thank a Veteran.

To those veterans both stateside and abroad, we thank you for your service from the bottom of our hearts.Â