Recently I caught a story on Yahoo Finance about the analysis of more than six billion nights of sleep data released from FitBit. We all think about sleep in almost abstract terms–I sleep or I don’t, I’m sleepy or I’m not, etc. But this has a real, tangible effect on how we operate as humans and how we perform at work, at home, and elsewhere. For instance, women get an average of six hours and fifty minutes of sleep per night, but men get six hours and twenty six minutes of sleep, both of them more than 13% less than the recommended eight hour a night target.

While it might be hard to adjust that overall number due to work, life, and family responsibilities (I have four kids under the age of eight, just sayin’!) one thing we can work on is bedtime consistency.

Here’s a snippet from the article:

The biggest finding in Fitbitâ€™s data may be the link between sleep quality and bedtime consistency.

That, Gleichauf explains, â€œis this idea that your bedtime varies.â€

And in America, it really does vary â€” by an average of 64 minutes. You might go to bed at 11 p.m. on weeknights, but stay up after midnight on the weekends.

The Fitbit data shows that your sleep suffers as a result. If your bedtime varies by two hours over the week, youâ€™ll averageÂ half hour of sleep a nightÂ lessÂ than someone whose bedtime varies by only 30 minutes.

And youâ€™ll pay the price.

You know how jet lag works, right? â€œWhen you have jet lag, itâ€™s the mismatch between the actual time, in the zone youâ€™re in, and your circadian rhythm,â€ Gleichauf told me. â€œYouâ€™re not on the right part of that curve to make you fall asleep.â€ So, at night in your new city, you lie there for hours, unable to fall asleep â€” and then in the middle of the next day, youâ€™re overcome by exhaustion.

When your bedtime varies over the week, then, youâ€™re creating self-induced jet lag. Gleichauf calls it social jet lag: On Monday, when you have to go back to work (and drag your bedtime backward), you feel crummy and youâ€™re more likely to get sick.

(Dr. Till Roenneberg, professor at the Institute of Medical Psychology at the University of Munich, calculates that every hour of social jetlag increases your risk of being overweight or obese by about 33%.)

â€œIâ€™m super excited about this data,â€ Heneghan says. â€œFor the first time ever, we were actually able to show the link between consistency and how long you sleep.â€ Source

The Impact at Work

At the risk of doing a ton of quoting today, I want to pull in a scientific explanation of what happens when we’re off our sleep game and then translate it into human speak. Ready?

Today, prolonged wakefulness is a widespread phenomenon. Nevertheless, in the field of sleep and wakefulness, several unanswered questions remain. Prolonged wakefulness can be due to acute total sleep deprivation (SD) or to chronic partial sleep restriction. Although the latter is more common in everyday life, the effects of total SD have been examined more thoroughly. Both total and partial SD induce adverse changes in cognitive performance.

If you take nothing else away from today, understand that sleep deprivation is bad because it affects how your brain works. The more you need it, the worse it’s going to be. And this affects you AND those around you (managers, peers, etc.)

First and foremost, total SD impairs attention and working memory, but it also affects other functions, such as long-term memory and decision-making. 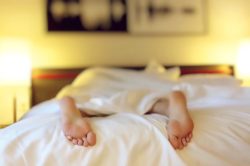 At the extreme edge of sleep deprivation (most of us are just seeing some of it, not a total breakdown), you lose mental faculties around attention, memory, and decision-making. Show of hands–whose job requires some level of active listening and/or decision-making? (All hands for readers out there SHOULD go up!)

Partial sleep deprivation is where it seems that Americans chronically exist with their lack of sleep consistency (affecting quality of sleep) ON TOP of the lack of quantity (consistently coming in under the national guidelines for eight hours of sleep nightly). The negative affects of partial sleep deprivation include impacts on attention and vigilance. Translation: if your workers have jobs that require themÂ to monitor safety conditions and they are mildly sleep deprived, those individuals could be putting themselves and those around them in life-threatening danger.

And finally, recovering mentally from a strenuous activity like coaching an emotional employee or debating a labor relations contract requires recovery. You only have so much brain power to use in a daily basis (this is a great read for more on the topic) and it needs to be recharged before you can use it heavily again. Lack of sleep impairs that ability and again, most of us have to be on our A-game more than once a day.

If we want to analyze some fundamental elements that rely on sleep to operate, the list is short:

In short, this comes down to performance. It’s a performance issue more than anything else. How can your company out-innovate the competition when workers are stumbling around like caffeinated zombies? How can you focus on a particularly challenging situation to determine solutions when attention wanders frequently and short-term memory is impaired? Or what about the increased risk of obesity and heart attack associated with lack of sleep?

My goal today was to “scare” you into seeing just how serious this is as an issue for yourself and your workforce. I’ve personally seen the impact of better sleep and if you look at some of the world’s top performers, they rely on sleep as their competitive advantage. It’s easy to idolize the “three hours a night” people that seem to fit in everything, but in reality those kinds of people are A) lying, B) not really accomplishing as much as they say they are, or C) cutting their lifespan prematurely in favor of making waves today.

What are your thoughts? How can we make this a company-level issue? Is a different approach to wellness the answer?Â