Recently I had the pleasure of joining Troy Vermillion on Eight Hour Grind, a show that looks at work trends.

After sharing with Troy some of the best ideas from our research, he sprung a surprise on me: my very own performance review! If you click to watch the video below, it will auto-jump to the time where the performance review begins.

How would you rate me based on my responses? Exceeds expectations or needs improvement?

In the last few years more and more companies have made the decision to move away from the big, annual performance review to more frequent, informal conversations about performance on the job. But the biggest question I’m hearing is “what happens to our compensation decisions?” After all, most of the time those two activities are deeply intertwined, so what’s the deal?

In the short video below I release some of the preliminary findings from a new research study I’ve been running on this topic. The short version: END_OF_DOCUMENT_TOKEN_TO_BE_REPLACED

I overheard a conversation the other day between two employees at a local restaurant. One of them said:

“I am so sick of our boss. He is always discriminating against me for coming in a few minutes late or not getting my work done as fast as Joe.”

The second employee turned to the first and responded:

“It serves you right. Show up on time. Do better work. It’s not really that hard.”

Because I’m incredibly mature and kindhearted I held my laugh in until I was out of earshot, but it seems like I hear this kind of thing more and more. People feel likeÂ allÂ kinds of discrimination are bad/wrong/evil.

“Discrimination” isn’t a blanket defense for poor work habits. Just an FYI. In the words of the young man who is wise beyond his years: show up on time and do better work. It’s not really that hard.

Share this with a friend or leader that would appreciate it today!

Instead of just hating on performance management processes, why don’t we do something about them? We hear a lot of stories about companies with rainbows and unicorns. Everything is perfect and happy. But the reality is most of us have challenges, and this is a real look at the specific practices we can use to improve outcomes.

New insights our team has uncovered at Lighthouse Research reveal a clear distinction between the performance management and engagement practices used at high-performing firms versus their lower-performing peers. The top-performing companies leverage a mixture of recognition, regular conversations, and other practices to create more engaging workplace experiences for their employees, ultimately driving engagement and performance to new heights.

This 60-minute training session will be held on Wednesday, May 9th at 11:00am Central. Sign up for the webinar below (subscribers click through to register.

The way we have done business in the past–it’s not going to work in the future. The world is volatile, complex… There’s rapid change.Â We have to change ourselves. It’s not making a change with tech or tools, it’s about the soft things: thanking people, helping them articulate the mission, helping them with careers. We have to be hard with the business, soft with people. -Adrian Gostick

If this concept inspires you, then this episode of We’re Only Human is going to get you excited about how to drive performance within your organization. I believe so strongly in the ideas in this book that I’ve worked with the publisher to set up a contest to give away a few copies! Here’s how it works:

Want to win a free book?Â Share this episode link on your LinkedIn feed, tag me and 2 or more of the BEST people you’ve ever worked with, and you’ll be entered to win a copy of the book!

Recently I caught a story on Yahoo Finance about the analysis of more than six billion nights of sleep data released from FitBit. We all think about sleep in almost abstract terms–I sleep or I don’t, I’m sleepy or I’m not, etc. But this has a real, tangible effect on how we operate as humans and how we perform at work, at home, and elsewhere. For instance, women get an average of six hours and fifty minutes of sleep per night, but men get six hours and twenty six minutes of sleep, both of them more than 13% less than the recommended eight hour a night target.

While it might be hard to adjust that overall number due to work, life, and family responsibilities (I have four kids under the age of eight, just sayin’!) one thing we can work on is bedtime consistency.

Here’s a snippet from the article:

The biggest finding in Fitbitâ€™s data may be the link between sleep quality and bedtime consistency.

That, Gleichauf explains, â€œis this idea that your bedtime varies.â€

And in America, it really does vary â€” by an average of 64 minutes. You might go to bed at 11 p.m. on weeknights, but stay up after midnight on the weekends.

The Fitbit data shows that your sleep suffers as a result. If your bedtime varies by two hours over the week, youâ€™ll averageÂ half hour of sleep a nightÂ lessÂ than someone whose bedtime varies by only 30 minutes.

And youâ€™ll pay the price.

You know how jet lag works, right? â€œWhen you have jet lag, itâ€™s the mismatch between the actual time, in the zone youâ€™re in, and your circadian rhythm,â€ Gleichauf told me. â€œYouâ€™re not on the right part of that curve to make you fall asleep.â€ So, at night in your new city, you lie there for hours, unable to fall asleep â€” and then in the middle of the next day, youâ€™re overcome by exhaustion.

When your bedtime varies over the week, then, youâ€™re creating self-induced jet lag. Gleichauf calls it social jet lag: On Monday, when you have to go back to work (and drag your bedtime backward), you feel crummy and youâ€™re more likely to get sick.

(Dr. Till Roenneberg, professor at the Institute of Medical Psychology at the University of Munich, calculates that every hour of social jetlag increases your risk of being overweight or obese by about 33%.)

â€œIâ€™m super excited about this data,â€ Heneghan says. â€œFor the first time ever, we were actually able to show the link between consistency and how long you sleep.â€ Source

END_OF_DOCUMENT_TOKEN_TO_BE_REPLACED

Earlier this fall I reported on a study we had completed at Lighthouse Research focused on performance management practices that separated high-performing companies (revenue, retention, engagement) from their peers. The infographic below illustrates these points well and offers a great set of takeaways and advice for employers looking to improve their talent management outcomes in the coming year.

The part I’m most intrigued by? Companies that follow a specific set of practices are more likely to not just improve the employee experience around performance and talent management, but also improve engagement and business results, a double shot of positive organizational impact. I’d love to hear your feedback–does this resonate with your own company? Have you seen similar benefits? 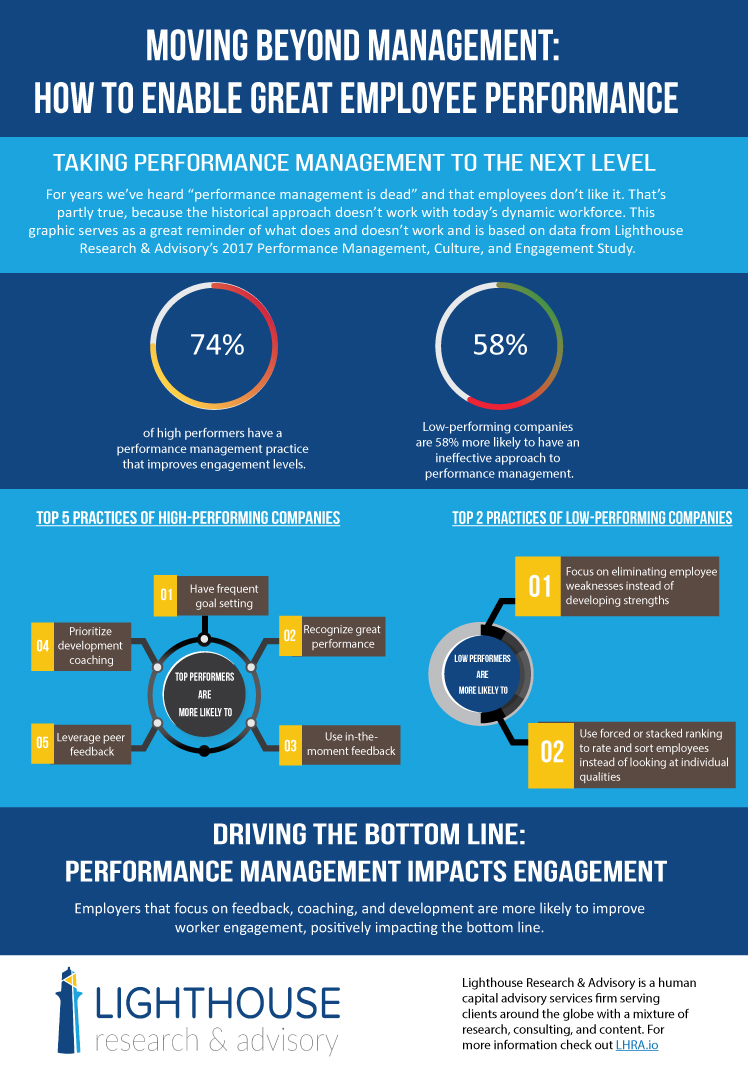