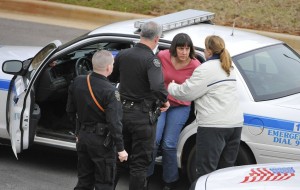 There are a few things I enjoy talking about, but workplace violence isn’t one of them. However, after the horrendous shooting at UAH (the University of Alabama in Huntsville) earlier this year, I knew that it would only be a matter of time before I covered the issue.

I was sitting in my supervisor’s office with a coworker for a short meeting. It was a Friday afternoon, so the meeting was considerably less serious than usual. We were cracking jokes and talking when we suddenly started hearing sirens outside. Within minutes stories began trickling in: there had been a shooting across the street at UAH. I went back to my office, finished up, and headed home. My brothers were attending UAH at the time, and I received word that they were okay. As I passed the school, I saw dozens of police cars and medical vehicles parked outside. I still get chills when I remember the scene outside as I passed by.

What happened that day

UAH professor Dr. Amy Bishop has been charged with murder in connection with a deadly shooting that killed three people and injured three more Friday afternoon.

Bishop, 42, was taken Friday night in handcuffs from a police precinct to the county jail and could be heard telling TV reporters, “It didn’t happen. There’s no way…. they are still alive.”

The basic back story was that Bishop was going to be denied tenure, so she came to work with a gun and shot several of her coworkers. So, what’s the lesson for everyone here? There are a few.

Taking the lessons to heart

“When I first heard about this, about a woman being accused of committing mass murder, I thought, ‘I’ll bet she has some other episodes of violence in her past,’ ” said Sandy Capps, from American Behavioral in Birmingham. “And as her story continues to unravel, we’re seeing that she did.”

Capps was referring to Bishop, 45, shooting and killing her brother in 1986. At the time Bishop, who was then 19 or 20, said it was an accident that happened when she was trying to unload the family’s shotgun. A report written by Massachusetts State Police concurred with that.

However, the police chief from Braintree, Mass., told the media that the matter was pretty much swept under the rug even though Bishop fired three shotgun blasts in the home and then used the gun in an attempted car-jacking.

According to The Boston Globe, Bishop’s mother, Judith Bishop, had served on the Braintree Police personnel board.

Also, Bishop was questioned in the attempted mail bombing of a professor at Harvard University – where she completed a doctorate degree in genetics – but was never charged.

Capps said the psychological profile of someone who would commit such a violent act in the workplace is a person who boasts about his abilities, doesn’t believe he is being treated as well as he should be by his colleagues, touts his education and intelligence to being superior as those around him, has obsessive behaviors, holds grudges, doesn’t respond well to criticism and is very focused on the appearance of things.

But can’t those attributes also be signs of a bad personality, not a potential killer?

“Sure they can,” Capps said. “Or they can be the signs of a ticking time bomb. And right now, there are employers all over the country saying, ‘I’ve got that person in cubicle A that sounds just like that.'”
Rather than having every employer be paranoid about all their employees, Capps said the smartest thing is to do thorough background checks and “make good hires.” Also, she said managers need to be trained to recognize “troubled employees.”

“I’m a big believer in not ignoring the small stuff,” she said.

“How did she even get a job working at the school when she had that type of background?” Davis asked.

As far as background checks go, Sheila Benson, president of Employment Screening Services in Birmingham, said even a decent background check might not have clued UAH that Bishop had a sketchy background.

After receiving her doctorate, Bishop worked at Harvard for 10 years as a fellow and research associate before she came to UAH.

“We’ve become such a litigious nation, (human resources) people don’t tend to offer up information that is negative,” Benson said. “Even though (Harvard personnel) were aware of these things, they probably wouldn’t acknowledge it unless someone came right out and asked them, and who would think to ask that?”
Because Bishop didn’t go to trial for the killing of her brother or in the attempted pipe bombing, there were no legal trails for UAH to follow in its background check.

According to the Federal Fair Credit Reporting Act, anything short of a conviction (such as an arrest or a dismissal) can only be reported after seven years if the individual makes more than $70,000.
Bishop wasn’t hired at UAH until 17 years after her brother’s death.

“One would think because it was an endangerment issue, (Harvard officials) would have shared what they knew about her shooting her brother and (the pipe bomb investigation),” Benson said. “But HR generally gives very limited info.

“My suggestion is always going to be to have a third party do the background check – and maybe UAH did – just so there’s someone looking over your shoulder to get as much information as you can.”

UAH President Dave Williams, who came to the college in 2008, said Monday a review of Bishop’s employment records show there was no criminal background check performed on her when she was hired in 2003. He said Bishop had three strong letters of recommendation, and those documents supported the university’s hiring of her.

Again, I hate writing about topics like this, but it needs to be said. People need to know what to look for and be aware of, because you never know when something like this can happen to you or someone you care about.

The Canadian version of OSHA has a free 20 minute course on workplace violence awareness. I encourage you to check it out and share this post with people you know who might benefit.

One thought on “UAH Shooting: Workplace Violence in My Backyard”