Every year I come back from another HRevolution and say the same thing: wow. But what can else can I say after watching 130+ international HR pros, recruiters, and business leaders come together, share ideas, and go home with a renewed fire to be better at what they do every single day?

These events seem to get exponentially better. Each time I meet a few more people, deepen those relationships during the year, and the festivities start even earlier. We keep the event to a one-day affair, but people arrive days in advance to get a jump start on networking and building relationships.

Not the usual HRev prep

This year’s event was prefaced by some interesting personal challenges. The devastating tornadoes and storms that hit the South last Wednesday knocked out power for over a quarter of a million people in north Alabama, and my family was included in that unlucky group. We were fortunate not to have any other damage, so we will be okay in the long run. After spending Wednesday night at home with no power, my wife and I made the decision to pack up and head to Atlanta early instead of riding out another night of candles and flashlights for the 3am baby feeding. When we arrived at the hotel on Thursday afternoon, we were greeted by lots of familiar faces (for me, anyway).

It was right about then that I became a second-class citizen and Bella, Bree, and Melanie became the main attraction. That, of course, was perfectly fine with me. I was excited for Melanie to finally meet the people that I talk about all the time and put some faces with some names. It was funny, because Trish McFarlane, one of my very good friends, another co-founder of HRevolution, and the gal I affectionately call “big sis,” rushed straight past me and hugged Melanie like they were best friends! That kind of greeting is what makes HRev feel like so much more than an event.

Friday morning, I had the opportunity to meet Mike Grindell and some of the geniuses on the SHRM Atlanta team. We ate at The Flying Biscuit and I have that place on my “must eat” list next time I’m in town. It was fun, raucous, and a great way to get myself into the right mindset for the event. :-) Before I went to breakfast, I ran to a nearby Chick-Fil-A to grab something for Melanie to eat. I got some funny looks from other runners as I passed by in the opposite direction carrying a giant drink and a bag of breakfast goodies!

During the day I spent time with Melanie and the girls enjoying some much needed rest. A short nap later and it was time for the tweetup to begin. I’m almost tired of the term “tweetup,” because I always get questions and people don’t seem to understand what it is. A tweetup is just a gathering of people, really. Some of us know each other from Twitter, and some of us do not. There’s really nothing wildly different about it from any other group of friends getting together to enjoy each other’s company. As always, the tweetup was entertaining, and even though I couldn’t get my trademark Diet Mountain Dew at the bar, I ended up drinking half a dozen Diet Cokes to try to fill the gap. The night wound down (for me, anyway) at the end of the tweetup and it was off to bed to be ready for an early start.

Saturday-sleeping in does not equal event prep 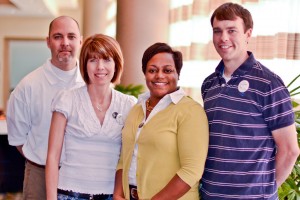 The best planning crew anyone could ask for!

Saturday morning kicked off as many do. I rolled over and was face to face with one of the girls who had woken up during the night. I leaped out of bed (way to sleep in on the biggest day of your year, genius) and got ready in record time. The other planners and I walked over to make sure the space was prepared and to spread out the goodies for everyone.

We gave the announcements to start the day, and the keynote speaker, Liz Gottung, came forward to get us moving. After talking for a few minutes, the crowd started quizzing her on professional development for her team, the state of the HR industry, and her role as the Chief HR Officer for Kimberly Clark. I was worried at first, because there were a lot of probing questions. Then I remembered that as a CHRO for a global organization, she probably faces that kind of scrutiny on a daily basis from other business leaders. The quote from her speech that hit me hard was “HR as a destination profession.” She talked about rotating marketing, sales, and PR people through HR to get their unique insights. All in all, it was a great session and I’m glad Tim Gardner was able to help us get her there to participate.

Making the hard choices (which session to attend?)

Next up we had sessions running concurrently, and, as always, I felt like I needed to be checking out each one to make sure it was on track. I spent most of my time during this block in Josh LeTourneau’s Social Network Analysis session. He is way smart and the information he shared has so many untapped applications. For instance, if you’re trying to push something through your organization, it would help to know who the influencers and informal leaders are. Your org chart does not show that data. However, through some testing and a thorough analysis, you can map your organization and find out who everyone goes to for help with problems or to talk about certain topics. Great stuff.

The next block was a tough choice. I really like Eric Winegardner, but I don’t directly manage a team (yet), so I didn’t spend much time in his Virtual Management session. I heard a lot of good feedback, though, including this one Â by Mike Haberman. I spent a chunk of my time in the Connecting in a Non-Creepy Way led by Dwane Lay and Shauna Moerke. I know the social thing and I’m (pretty) good about not being creepy, but I wanted to hear Dwane since I haven’t met him before. I came in at an opportune time, because one of the participants brought up a Â question about following people online who are “HR coordinators” (or low-level HR pros, in other words). He wanted to know how the information they share was valuable to the community. I was about to interject when someone countered that everyone at every level has something valuable to add, and I seconded the notion with a hearty fist pump and a “woohoo!” from the back of the room. :-) 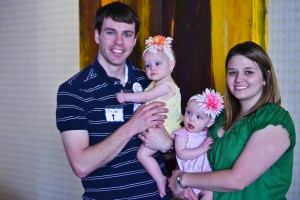 Those three ladies were the belles of the ball!

Lunch was fantastic, and I was able to share it with Melanie and the girls. It was nice to have a short rest before kicking back into high gear for the afternoon sessions.

At the next set of sessions, I split my time between Wellness Doesn’t Suck and Designing for Influence. We made this block a little longer than the others to accommodate some of our speakers, but it felt too long to me, and many of us were tired after a filling lunch. I walked into the influence session just in time for Eric Winegardner to challenge the room about the HR department being the very best department in the entire organization. It’s not enough to push policies and rules on people. You need to be the shining example of what to do. I totally agree with the sentiment!

During the final group of sessions, I was getting revved back up, and I spent at least fifteen minutes in each of the rooms. First I checked out The Great Performance Debate with William Tincup and Mike Carden. It was focused on whether the annual performance review process is something that is driven by the managers, the employees, or the organization’s leadership. Definitely interesting. Linking Culture, Brand and Revenue was up next with Nate DaPore of PeopleMatter. One of the quotable quotes from that session was “how does HR create culture?” I was quick to respond via Twitter that HR’s role is to reinforce and communicate culture, but it doesn’t create it. That’s what I do every day at work! And I wrapped up the hour by spending some time in How do I Get There from Here with Paul Smith and China Gorman.

It seems like this type of session is perennially present at HRevolution. Basically, how do we stop talking within the echo chamber and make real, lasting changes to the rest of the HR world. I chimed in near the end about the eBooks that have been coming out recently. See, I created those as a way to reach out to the wider HR community. In recent months, half of my LinkedIn invites have come from people who read the guides but aren’t regular blog readers. It’s my tiny way (with the help of everyone who contributes and shares the tools) to reach out to HR world outside of the social media sphere.

And with that, it was time to wrap up the event. We took some comments from the audience, and Liz received a standing ovation when she said that her eyes had been opened to the wider HR community’s passion and that she felt more positive about the future of the profession than ever before.

A few thoughts in no particular order

If we met even for a minute or two, I hope you could tell how excited I was to help provide a forum for everyone to come together, share ideas, and make HR better in so many ways. I smile every time someone tells me how much they appreciate me/us for putting these events together, because I get more out of them than I feel like I put in!

Both of the above photos and a whole heck of a lot more great ones from HRevolution can be foundÂ here courtesy of Monster.com’s extremely talented photographer, Alana Lombardi.