Why would I take a few days away from my precious family to attend the SHRM Leadership Conference? It\’s simple, really. I wanted to see and hear from other people in the SHRM volunteer community. I created the SHRM Volunteer Leaders LinkedIn group to help connect and collaborate with these people. But that was just the first step. Now the Rock Your Chapter eBook is out there and I want to keep the conversation going about how to make chapters better.

I\’m looking bigger than my own little chapter. Yes, I\’m dedicated to helping them and have already set aside 2011 to serve as the Social Media Coordinator/Webmaster for NASHRM, but I want to connect with other leaders to learn and grow (them and me).

The LinkedIn Group: Mark Christensen initiated a discussion about having a time to talk about state best practices during the Leadership Conference. The discussion received a lot of comments, and (surprise surprise!) SHRM then added some time to talk about it. If that doesn\’t make you feel good that they are paying attention (somewhat, anyway), then I don\’t know what will.

Chapter director collaboration: My friend Bobbi Wilson found out recently that she was going to be the Certification Director at NASHRM for 2011. In an effort to help her get started on the right foot, I reached out to my network to find other certification professionals at other chapters. I gathered some names and email addresses and passed them along to Bobbi.

Now tell me this. If this is her first time as our chapter\’s certification person, do you think she\’ll do a better or worse job now that she has 5-10 people to brainstorm with? Yeah. That\’s a micro example of what my eventual goal is with this SHRM volunteer leader stuff. 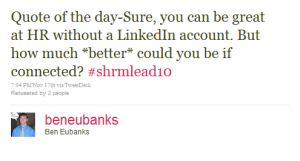 I tweeted this last night during a conversation, and it started a great discussion with some of the people I was sitting with. At one point earlier today, someone actually said the words: â€œI\’m connected enough.â€ I had to roll my eyes at that. There\’s no such thing. Just because you can do what you do now without a solid network in place doesn\’t mean you\’ll always be able to handle what comes your way.

Networking is a great way to prepare for those â€œAhhh! What do I do?â€ events. Just like in the job search, by the time you\’ve lost your job it\’s too late to start networking. Same with this. Don\’t wait. Join in. Use some of the tools and see what you can do. Need a hand? Here\’s a social media mentoring program.

Let\’s stop living in our little bubbles. It just doesn\’t cut it anymore.