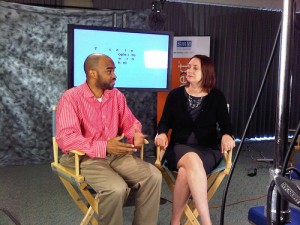 Despite the intense annoyance he must have felt after meeting me ;-), Curtis Midkiff, SHRM’s new Social Media Guy took the time to do a short email interview to talk about the event and what he sees for the days and weeks ahead. Whatever your thoughts on SHRM may be, this guy is doing some great things, and I can’t wait to see what’s next!

So, Curtis, we’ve seen you here before on the blog in the days ramping up to SHRM10 (meet Curtis Midkiff). Out of all of your predictions for the event, do you think it went as well as you hoped it would? What was the best/worst part?

You had the opportunity to meet some great people I like to call friends (Mike VanDervort, Jessica Miller-Merrill, Matt Stollak, etc.). What was your impression of them in real life as opposed to their social personas? Anything particularly surprising?

Ben, I think the best analogy to answer your question would be that in many ways the Annual Conference was like a first day of school for me. Â I wanted to do every thing that I could to make a good impression on the “cool kids” of HR whose voices are influential in the perception of our organization. Â  Â Prior to the event, I had read blogs from many of these folks, which in some cases were very critical of SHRM so I am not sure what I was expecting when they arrived and quite frankly I was a bit nervous. Â  What surprised me upon meeting them was that they were as happy to meet me as I was to meet them and they are open to lending a hand to me as needed and I appreciate that.

I was able to sit in on the social media panel you were a part of. I thought you did well and spoke admirably, but it was a tiny event in a back hallway. Do you have plans to get “social” more face time at SHRM11?

I definitely have plans to have social media front and center next year. Â  I am not as concerned about whether I personally get noticed as long as my goals are achieved. Â  In terms of engagement with members I am not going to wait until SHRM11. Â I am embarking on a year long “BLOGAPALOOZA” tour which will allow me to directly engage and meet with our members to learn more about them and how we can better serve them via social media.

Between the hashtag, the tweetup, blog coverage, and other online content marketing the SHRM10 event, did you think the event was shared adequately to those who couldn’t attend? Is there anything that could have been better?

I think that through the hashtags and event we did a good job. Â However, I am indebted to my Blog Squad as well as the other bloggers like Charlie Judy of HR Fishbowl and Bryan from DriveThru HR for engaging people on a daily basis. Â  Monster.com’s social media activation at the Annual Conference also was pivotal in letting people know what’s going on. Â  In terms of what could be better, I wish that our conference blog was more prominently featured on the SHRM.org homepage and the Annual Conference page.

This is not really a question, but I had the opportunity to spend some time in the social media lounge. The flat screens with the Twitter feed were great, and the atmosphere in there was always comfortable. I think you guys did a fantastic job on that!

Thanks for the kudos. Â Make sure to let me know how we can make it better.

And, just to fit into this week’s requirements for the HR carnival, I must know: what do you wish you had learned at SHRM10?

And there you have it, people! I really appreciate Curtis for taking the time out of his busy schedule to answer a few pesty questions and let the rest of you know what he’s up to. Thanks for dropping by, and make sure you check out the other SHRM10 coverage if you haven’t already!