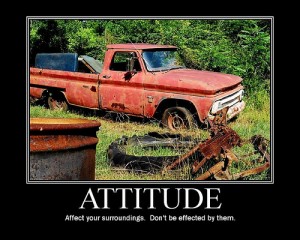 I’ve always been of the opinion that companies should hire for will and train for skill. While you can train someone on how to perform task X, you can’t train them to be excited and energetic. And I’m not the only one who thinks that way. I heard this great segment on the Dave Ramsey show recently and it made so much sense from a talent management perspective that I just had to share.

We have five books that we give you when you are hired, and they\’re short, easy-to-read books. All teach a core valueâ€”a principleâ€”that we espouse inside of our organization. You\’re required to read all of them within the first 90 days of employment.

QBQ by John Miller about personal responsibility is one of them.Â The Monk and The Merchant is a book illustrating that the merchant has as holy a calling in the marketplace as the monk does. Ministry in the marketplace is ministry. The next one is calledÂ The Go-Getter, which is a book from the 1920s that a friend of mine left to me when he passed away. It\’s the book that originated the saying that someone is a â€œgo-getter.â€ It\’s about perseverance never being denied. The next one isÂ Who Moved My Cheese? by Dr. Spencer Johnson. It\’s classic; most people have read it, but you need to read it again because occasionallyâ€”latelyâ€”your cheese got moved. You have to start doing some new things if you want some different results when new things happen. Change is a constant.Â Rhinoceros Success is a cute, funny little book about being passionate and being a rhino to run over stuff instead of being a cow.

Those are all core values: passion, perseverance, personal responsibility, ministry in the marketplace, change is a constant (adaptability). These are all core things in our organization.

The employees check off and initial with our HR department that they\’ve read the books, and I take them at their word. Ultimately, I can verify that they\’ve read it by how they behave, because information affects behavior. Information affects attitudes. If you don\’t grasp it and don\’t actually start using some of the language from those books as we execute things in the marketplace, that\’s going to be a sign that you lied.

Honestly, by the time you go through all the crap that you go through for us to hire youâ€”because we really talk to you a lotâ€”something as minor as whether or not you read a book is not an issue. You\’re going to do it. You\’re going to want to do it, or you\’re not going to be part of this team. It\’s something that just naturally flows out of our hiring process. We\’re so thorough.

It just reiterates what people have been saying for a long time.

Hire for attitude, train for everything else.

6 thoughts on “Hire for attitude, train for everything else”