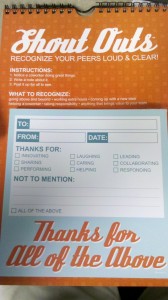 My friend Cori at Baudville sent me this cool tool for peer to peer recognition the other day. I’m itching to try it out. When I head to our off site location later this week I’ll be delivering it and offering some encouragement/guidance to our on site HR person to get it rolling.

Peer recognition in a nutshell

The basic idea is that much of the stuff that gets done isn’t obvious to managers, so having peers recognize each other covers those “unseen yet praise-worthy” actions.

There’s also the fun element which shouldn’t be underestimated. I love telling others how awesome they are for doing something extra special. The only way to make that even more fun is to do it when others can see and hear about their accomplishment. That not only earns them some extra kudos, but it also increases the likelihood that they will make that type of action a habit.

Do you have some sort of peer recognition program at your company? It can be as informal as a bulletin board for notes or as formal as a reward program where you get recognized in some sort of ceremony. Love to hear how others do this! 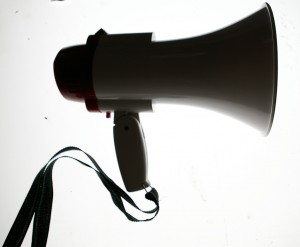 Today I’m giving a few shout outs. Why? Because people are doing great things and I don’t want you to miss out.

I had the opportunity recently to speak with Mike Haberman of Omega HR Solutions and author of the HR Observations blog. I’ve been reading Mike’s blog for almost a year now, and he is darn brilliant. His experience and passion show through his work, and I am glad we made contact. There are some amazing posts in his archives, but make sure you check out the recent ones he wrote on the idea of a free agent nation being alive and well and HR survival lessons from Drucker. END_OF_DOCUMENT_TOKEN_TO_BE_REPLACED

I bet you have a process at your company to reprimand employees. You probably cover everything from verbal and written reprimands all the way to suspensions. I\’m quite certain that every organization has a way to notify employees when they are performing poorly.

With that said, does your organization have a way to commend employees for a job well done? Aside from a short and sweet “attaboy” or “attagirl,” do you have a way to show your appreciation in a written format?

I\’ve seen hundreds (thousands?) of reprimands. I\’ve seen a single commendation. That leads me to two possibilities. One, there really aren\’t any other staff members who deserve being commended for performing well (not likely). Or two, there aren\’t any supervisors willing to commend someone for doing well (quite likely).

Or maybe it\’s more benign, and the supervisors really don\’t know the power of a short note letting someone know that he/she knocked it out of the park.

Whatever the cause, it\’s a problem that needs to be addressed. I\’m willing to bet that many of you work in companies that are similar. Check out your ratio. I don\’t think you should be praising your employees daily for every little action, but when someone really takes up the slack and goes above and beyond, then it really wouldn\’t hurt to show some appreciation.