Employee referrals are not a new topic in the HR and recruiting space. But the truth is that many companies phone it in when it comes to referrals, often leaving them with lackluster results. It takes a little time, effort, and intention to get a referral program into good shape, and the benefits are far-reaching.

Hiring A Players with Referrals

Referrals as a Talent Channel

You donâ€™t create a great place to work. You defend it. -CEO of a firm with multiple â€œBest Places to Workâ€ credits

Letâ€™s face it. Many employees have not had the opportunity to work at a company with a great culture. But when they find one they inevitably become protective of the culture. This is a great tool for ensuring a strong referral program without having to constantly weed out poor performers and poor fits. Itâ€™s been said that A players hire A players, but B players hire C players, and companies of all sizes, industries, and geographies are trying to find those critical A players to remain competitive.

The right referral program needs to not only prioritize referrals as a source of hire, but it also needs strong technological underpinnings to help manage the volume and variety of referrals. Systems like MintMeshÂ and others provide that functionality and help companies to get a grasp on what is typically operated as a â€œshoot from the hipâ€ type of program. From an analytics perspective, being able to track quality of hire, time to fill, and other metrics and tie them back to the referral source is an incredibly valuable practice. Gathering the right data to support your referral practices is going to generate higher quality hires, ensuring those A players end up at your organization, not at the competition.

Diversity has become an HR buzzword, thrown around in meetings and leveraged for positive PR, but what does diversity really mean?

Legally, diversity refers to the age, socioeconomic background, gender, race and ethnicity differences in your workforce. However, the concept of a diverse workforce encompasses more than that, capturing more nuanced elements such as religious and political views, social status, personality, communication styles, and cultural values.

While virtually all companies say they encourage diversity, and the evidence for diversity as a business performance enhancement is clear, the question remains â€“ how can we source and recruit a diverse workforce?Â There are three keys to success:

While referrals can help any company, I see the benefits to small and mid-sized businesses as being some of the most valuable.

Referrals are the most powerful tool in recruiting. A provocative statement, sure, but also proven to be true. Recruitment is the lifeline of all organizations and referral programs can deliver top talent to your door at a fraction of the cost of traditional recruiting. According to Dr. John Sullivan, if 50% of your companyâ€™s hires arenâ€™t coming from referrals, then you need to get proactive with your referral program.

This is even more true for small and mid-size businesses. With tight recruiting budgets, limited organizational agility, and a need for highly engaged workers from day one, the SMB market can benefit from referrals by reducing costs, lowering time to fill, and ensuring long-term retention and engagement.

Even offering financial incentives to employees for referrals is still a small price to pay for creating an army of talent scouts. Offering a $1000 bonus would still keep the referral hire cost far below that of other methods.

Other cost savings associated with hiring referrals include lower spending on advertising, job boards, and agency fees. Meritage Talent Solutions founder Kara Yarnot found that the typical agency charges a fee of 20 percent of a hireâ€™s first-year salary, equaling $20,000 for a single $100,000 hire. If weâ€™re comparing that to the referral program cost per hire data above, your organization could have hired 20 people for the same cost of one hire through an agency.

Referrals save costs and benefit the bottom line.

In todayâ€™s fast paced workplace, speed is crucial. Referrals can significantly increase hiring speed over traditional recruiting methods. Referrals are the fastest method to hire with an average of 29 days for referrals. Compare that with 39 days for job boards, and 45 days for career sites, on average.

This is due in part to the fact that you have a broader network when youâ€™re prioritizing referrals. Your employees know the company better than anyone and with the rise of social media, employees have networks of contacts at their fingertips ready to tell their peers and friends about openings at your organization.

To get a sense of the size of this potential network, consider this: Pew Research estimates the average person has more than 600 social connections. If your business has just 100 employees, thatâ€™s a potential 60,000 people that can learn about your openings with a good referral program.

Not only do referrals start fasterâ€“they also onboard faster. A key part of onboarding, beyond understanding the workplace policies and requirements, is assimilating into the social fabric of the organization. By having a social connection already in the firm, the referral can onboard faster. This equates to higher productivity and performance from day one, which is critical for SMBs that donâ€™t have extensive resources to train and develop competencies in new hires.

Referrals are faster to hire, start working quicker and out perform non-referrals.

One third of new hires quit their job after about six months and 32 percent of employers say they expect employees to be job hoppers. This demonstrates the â€œrevolving doorâ€ attitude employees have towards companies, but referral programs can increase job loyalty.

Referral programs are proven to decrease turnover and increase retention. 46% of referral hires are retained after one year as opposed to 33% for non-referrals. With referrals producing 25% more profit than their peers, this is doubly valuable for employers.

As mentioned in a recent blog, great companies are made up of great people, and referrals are the best source for bringing those great people to your front door. 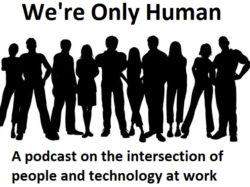 In the latest episode of We’re Only Human, I explore talent mobility and its applications in the workplace. Talent mobility is the practice of using internal talent to fill temporary or permanent roles.

Unlike succession, which is typically a top-down approach, talent mobility takes into account the interests and aspirations of employees.Â  As a talent practice, the idea of talent mobility isn’t necessarily new. However, there is renewed interest in the topic due to some interesting trends covered in the podcast, including changes in career longevity, employee ownership over career paths and work tasks, the gig economy, and challenges with sourcing high performers.

In addition, IÂ examine some case studies and examples of companies that are doing interesting work with talent mobility, including World Bank Group, Chipotle, and Hootsuite.

Listen to the show on the show page HERE or using the widget player below, (Email and RSS subscribers click through)

For more information about Talent Mobility you can check out myÂ presentation on Slideshare:Â http://www.slideshare.net/beneubanks/talent-mobility-the-key-to-engagement-retention-and-performance

As a reminder, you can subscribe to We’re Only Human and all the HR Happy Hour Podcast shows on iTunes, Stitcher Radio, and all the major podcast player apps – just search forÂ ‘HR Happy Hour’Â to subscribe and never miss a show!

I realized this weekend that I didn’t let you guys know about a free webinar I’ll be doing tomorrow with RecruitingBlogs. If you’re interested in joining me for the session you can sign up here.Â

Talent mobility. If you’re not familiar with the term, it’s the practice of using internal talent to fill roles as well as creating new paths and opportunities for your staff. It has a whole host of impacts and benefits.

In the webinar I will be talking about some companies that have made talent mobility a priority, from Chipotle to Hootsuite and World Bank Group to Tata Consultancy Services. Each case study tells a slightly different story, and I’m excited to share those examples.

In addition, we’ll look at some different sources of research on the topic that allow us to dig deeply into why this talent process matters. The research I’m doing these days around gig workers and the talent economy (I’ll be sharing some info on this in my next post) points to the fact that people want more control over their own careers and development. With that in mind, giving them flexible opportunities to contribute, grow, and develop just makes sense if we want to not only engage them, but keep them long term.

If that sounds interesting, I’d love to have you join. I try to make my webinars fun and entertaining (lots of stories) while still giving you some actionable takeaways.

Body Movin’: Why Talent Mobility is King of Retention

I have learned that based on my own interests and daily work, I am eager to consume just about anything I can find related to talent management. When I got this review copy, I dove in and while it’s been a while coming, I finally had time to put together a review of this excellent resource.

If you’re also looking for ideas and tips on talent management, then I encourage you to check this book out. I think you’ll learn a few things, see some old concepts in a new light, and challenge yourself and your organization to be better at managing talent overall. The Talent Mandate is a great book. Click here if you would like your own copy.

One of the common topics around the HR and recruiting space is talent. How to find it, recruit it, motivate it, retain it, and (at times) get rid of it. Poaching talent is a fact of life. If you get one of those great people to agree to come work for you, there’s only a matter of time before they are courted by another employer.

One thing we don’t really ever consider is the other side of the poaching equation.Â I saw this funny comic the other day and just had to share. Stuart at 1.00 FTE is a funny guy and this comic ranks up there with my daily Dilbert addiction. 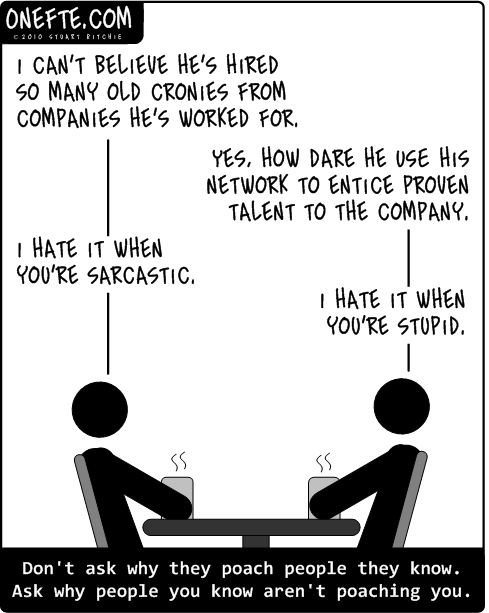 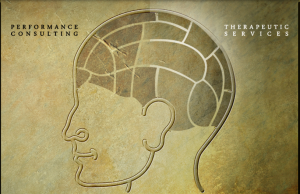 Wow. That’s all I can say about the recent NASHRM September workshop event. Doctor Daniel Crosby shared some amazing insights based on his background in both clinical psychology and business consulting.

In another great gesture of generosity, he offered to let meshare his presentations with you. The slides are found at the links below.

Depth Leadership: Leading from the Inside Out

I know it’s not the same as being there, but maybe it’s an incentive to reach out and learn more about these topics!